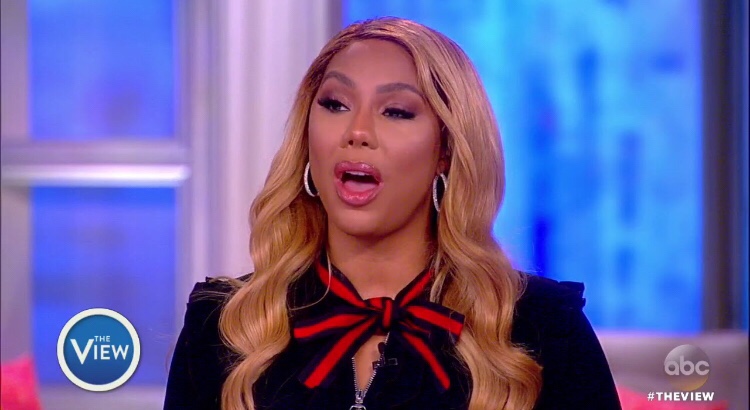 Tamar Braxton opened up about her relationship with Vincent Herbert on Friday’s episode of The View.

The reality star co-hosted the show and shared what’s really going on between her and her ex, who also joined the women at the table on the show. Back in October 2017, Tamar filed for divorce from Vincent Herbert after about nine years of marriage. Two months later, Tamar wrote on Instagram that a woman had informed her that Vincent got her pregnant, which he denied.

On The View Friday, Tamar addressed rumors about her and Vincent’s relationship and speculation that their split was a plot line for their reality show, Tamar & Vince. Tamar shared with the co-hosts.

“I wish mine wasn’t real, I wish I could say that a lot of the times it’s made up, just so I could hide behind the truth sometimes. But in this situation I absolutely have no reason to lie about my marriage and the things that’s happening in my marriage for ratings. I think that’s disgusting and I would never sell my soul to the devil like that.”

“I have a regular marriage and regular marriages like everybody else, things happen and in my marriage you know it was just to a point where I felt like divorce was the only option that I had left. Although we’re in extensive counseling and that is much needed and it still will always be, but I think the bigger picture of everything is that we have a responsibility to my amazing 4-year-old son and just to raise him in the most comfortable, amazing, loving, secure household that we can. That’s why we don’t live together.”

Tamar went on to confirm they don’t live together and said:

“No we don’t, I definitely filed for divorce that’s not a lie.”

Vincent then joined the co-hosts at the table and again denied the rumors that a woman is pregnant with his child. Watch the video below to see Tamar and Vincent talk about their relationship and the rumors.