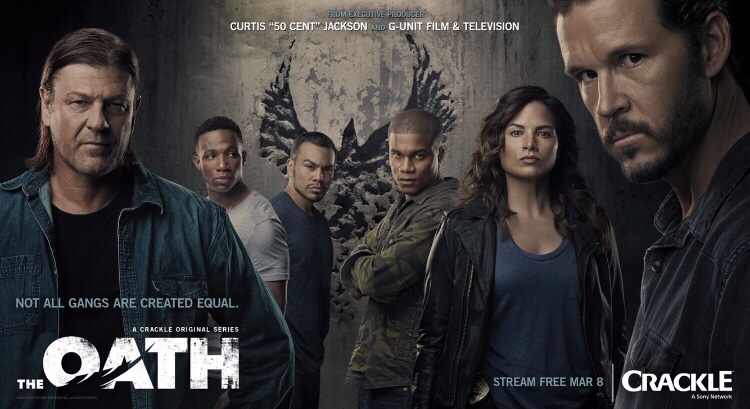 On The Oath Season 1 Episode 5 – “Payback”, Beach shares a crucial piece of information to prove her loyalty to the Ravens, leaving Foster to fume. Hammond and Ramos make a surprising discovery about The Ravens. Ramos realizes that Lourdes and Veronica aren’t safe in their home. Neckbone summons the cop gang chiefs to announce a bounty on the WMD ringleaders. Tom starts a campaign to take back control of the Ravens, exploiting and stoking discontent with Hammond’s leadership. Winters makes a direct attack on the Ravens. You can watch the full episode below.

The Oath was written and created by showrunner and former longtime Los Angeles County Sheriff’s Deputy Joe Halpin (Hawaii Five-O) and executively produced by Curtis “50 Cent” Jackson. The 10-episode original series explores a world of gangs made up of those sworn to protect and defend and sheds light on corrupt and secret societies that are nearly impossible to join.

Only a select few make the cut – but once inside, members will do what they must to protect one another from enemies on the outside and from within their own ranks. The Oath stars Ryan Kwanten, Cory Hardrict, Arlen Escarpeta, Katrina Law, J.J. Soria and Game of Thrones alum Sean Bean. Its cast also includes Michael Malarkey, Eve Mauro, Kwame Patterson, Linda Purl and Elisabeth Röhm. Jeff T. Thomas directs the series, which is exec produced by Jackson, Todd Hoffman, Dennis Kim, Anne Clements and Halpin.